Part 1: A Brief History of 3D Printing in the Orthotic & Prosthetic Industry

3D printing—also known as stereolithography (SLA) or rapid prototyping (RP)—is the process of making three dimensional objects from digital files. In this blog series, we will explore how 3D printing has changed the orthotic and prosthetic industry. But first—let’s start from the beginning. 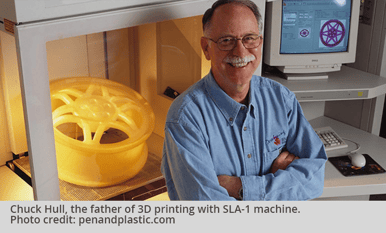 This invention had multiple false starts, but the father of 3D printing is widely recognized to be Charles (“Chuck”) Hull, who patented the SLA machine in 1986. At the time, Hull worked for a company that used UV light to place layers of plastic veneers on furniture. Frustrated with the slow and expensive development of prototyping small parts, he envisioned a process for stacking thousands of thin plastic layers and creating shapes using light to form 3D objects. After patenting the SLA-1 machine, he capitalized on his invention by co-founding the now global company, 3D Systems Corporation.

At the time of his invention, he told his wife it would take between 25 and 30 years for the product to make its way into the home. His prediction proved to be correct because, at the time, 3D printing was prohibitively expensive for a person earning an average income. In 1988, the SLA-1 machine retailed by 3D systems cost $300k, or roughly $650k today. This high price tag was only attractive to industrial production companies because they could create relatively inexpensive prototypes.

In the late 1990s, 3D printing was first used in medical applications starting with dental implants. In 1999, the first 3D printed organ was developed by the Wake Forest Institute for Regenerative Medicine. While prosthetic applications for 3D printing was being explored by academics, such as Rogers et al at UTSA and UT Austin in 1991, it would not be until 2011 for the invention’s prosthetic potential to gain traction.

The first 3D printed prosthetic had an unlikely start with American artist, Ivan Owen. Owen crafted a mechanical hand for a steampunk convention and posted a video of his process online. The video attracted the attention of a carpenter in South Africa who recognized the design’s possibilities for his own hand, which had lost four fingers in an accident. Owen and the carpenter decided to collaborate online.

Their online project caught the attention of a mother who needed a hand for her son, Liam. The five-year-old boy was born missing four fingers and the prosthetic solutions available were expensive and would need to be replaced every few months to accommodate Liam's growth spurts. When Owen heard of the mother's unique problem, he requested the donation of two 3D printers from a printer manufacturer and created the first printed mechanical hand that could scale to fit Liam as he grew.

Instead of patenting the prosthetic hand, the small team released open source plans online so anyone with the software and a 3D printer could improve upon the design and print. The grass-roots initiative led to the founding of E-Nable, a non-profit organization with a large network of volunteers capable of developing prosthetic devices for underserved communities (more on the impact of hobbyist on the O&P industry to come).

Advances in software, materials, and wider accessibility has improved adoption of 3D printing in the O&P industry, but many barriers still remain. In the next installment, we will explore these challenges.

A partnership with SPS means you can spend more time with your patients. We offer the widest selection of O&P products, simple ordering solutions, and the best support in the industry.

Supplier L Code options expressed herein are based upon information provided by the manufacturer. The final responsibility for correct coding is the sole responsibility of the practitioner submitting the claim.